I just picked this Admiral up yesterday. The cabinet is solid bakelite and it's in near mint condition. You can't see in the picture because of the flash that it is playing Andy Griffith. The set is already particially recapped but i will be finishing it soon as i want to put it into regular service to watch old programs on. I picked this up for $25 and a tank of gas. I think i did really well on this one. 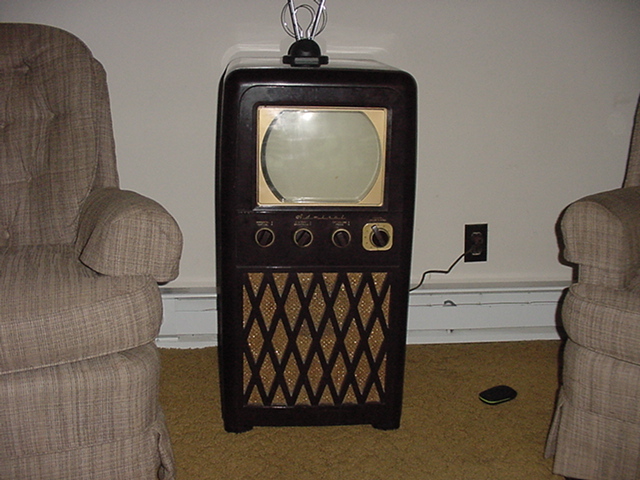 It's very bright, just the flash washed out the image on the screen. For some reason I cant turn the flash off on my camera like I have done with other set's.

Tony V wrote:It's very bright, just the flash washed out the image on the screen. For some reason I cant turn the flash off on my camera like I have done with other set's.

Black tape, like electrical tape can cover the flash. IR will still get through but not much. If IR is a problem in the exposure use photographers black tape, stops IR, (3M). For flash pictures that get washed out but flash still needed, try one layer of white self stick wallboard tape. The adhesive is peel-able like a Post-It note so it won't foul the front of the camera. Most camera have a photo cell port that sends a quench signal to the flash circuit so the bounced light determines flash intensity. If ones hand or fingers cover this port, the flash will fire full power. Some cameras have flash control settings but they are often buried in three layers of menus

Imaging live analog TV screens requires a mount and an exposure time of greater than 1/30 sec so that a black bar does not wipe the image. Essentially, the photo needs two scans to account for interlace. Old school film cameras I would bounce the flash off of the ceiling.

Imaging a Digital TV picture? On your own...

Oh, I once had one of those Admiral Bakelite's. The control trap door was lost. Hunted for years, gave up. Gave the TV away. The collector was not TV knowledge and later said I gave him junk he could not fix it. He was a his own victim of "shotgun" servicing and ultimately destroyed the TV

I found a local collector for all my remaining TV's so I can concentrate on radio. I have been discovering TV related parts and ephemera that I will be moving on as time permits. Stuff like service hand books, schematics, simple test sets, Bel fuses, Glo-Bars, even a safety mask for a 22" round color tube. He, he I was going to make a bird bath out of it

Tony V wrote:I just picked this Admiral up yesterday... I picked this up for $25 and a tank of gas. I think i did really well on this one.

OK, rub it in.  I NEVER find deals like that!  Congrats.

One of my old elmers had a huge building. It was about 75x125 and 2 stories, one of the old downtown type buildings. He had it packed full of old stuff. He started packing it in the back with stuff from the 20s all the way to the late 60s/early 70s. I use to buy all kinds of stuff from him, the two jukeboxes I have I got from him. He use to have 3 or 4 of these sets in the upper part. I use to think about asking him about these sets but never did. I could have got them cheap, probably 5 bucks each back them. That building was about half full with radios,tvs and other tube stuff and the rest was appliances. He even had pallets of new TV picture tubes in the loft from the late 40s to early 60s. He probably had in the thousands of TV and radios there and probably over a million tubes.
Sadly all those sets and more are gone now. At least I was able to save a few items. I am glad to see this one still in existence.