They came from Brandon, Florida. The guy delivered them for not a high charge.
1 1949 Motorola model 12VT15 table model television. Safety glass is broken, and, bottom wood strip that holds glass in is missing. It also has some minor veneer issues on front. Otherwise, cabinet is excellent. It was on ebay, and, not selling, so, I worked out a deal on it and, the other item he brought me...
Set has back cover, and, cardboard hv cage.

2 A Firestone Air Chief console art deco radio. I think Stewart Warner made it.
It was a pretty deluxe set. It's a three band radio, with electric push buttons that operate an electric motor that changes your favorite stations.
There are veneer issues on top, but, I'll be able to fix the cabinet.
This set was also offered with an optional remote control on a 25' cable, but, sadly, that isn't with this radio..
This radio features two windows that show the different tone settings of the switch.
See other thread for model.
When finished, this will surely be a very nice radio. It's a ten tube set, including the eye tube.
I'm thrilled to have them...
_________________
Please also join us here; www.videokarma.org/index.php

I found out what saved this set. When somebody took set apart, they didn't put it together correctly. Ant. strip is under the chassis, and, speaker plug, which uses the field coil in the power supply is not plugged in. So, when the dealer tried plugging it in no major filters were involved, so, rectifiers lit normally with the rest of the tubes. As you can see, the major share of the case is in excellent condition.
_________________
Please also join us here; www.videokarma.org/index.php

I like that one, Bill! I was wondering if there was damage done firing it up with no CRT being lit. You answered my question. Good luck and I look forward to watching you go thur this set.

Send me your pictures, Bill. I will be happy to get them on here for you. 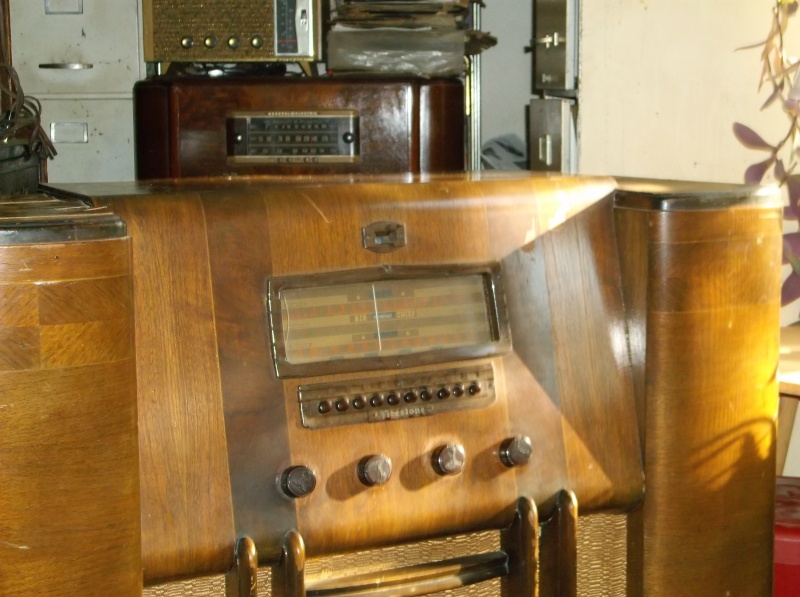 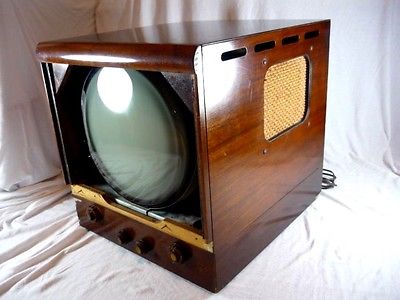 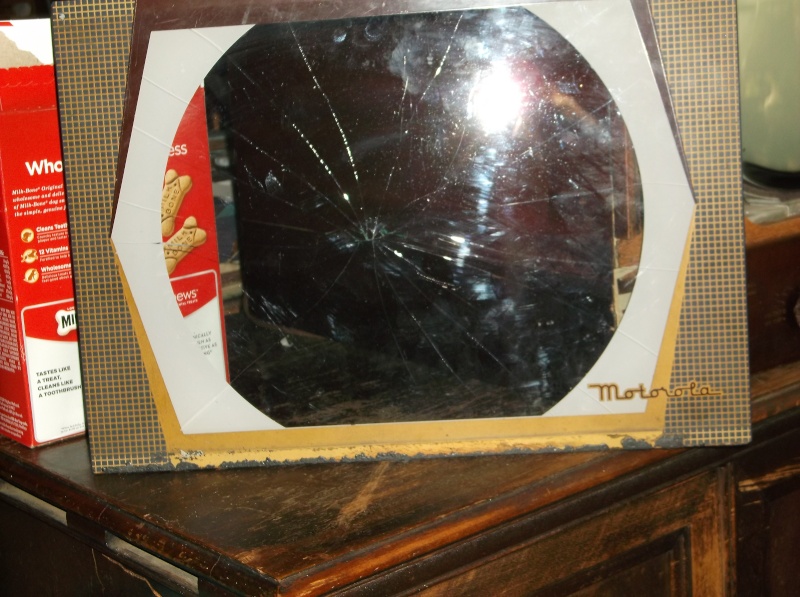 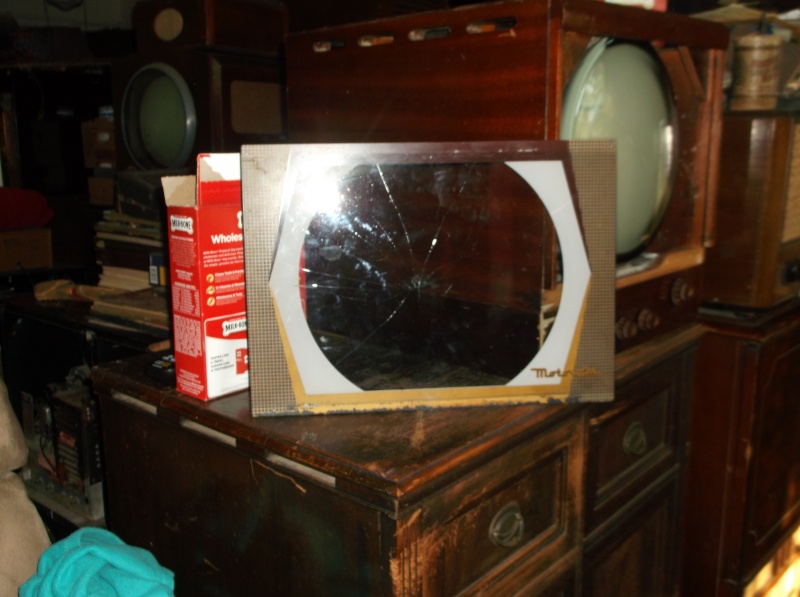 Too bad about the front glass. Everything else looks mighty good. 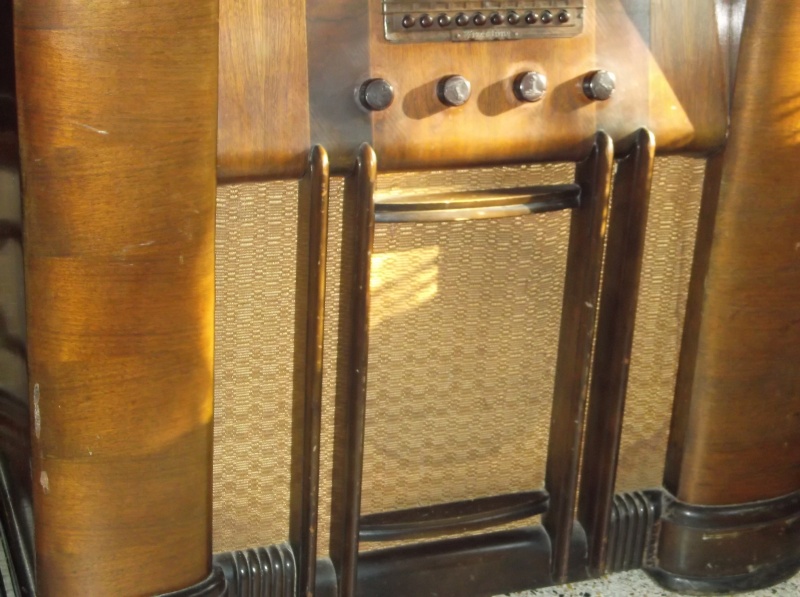 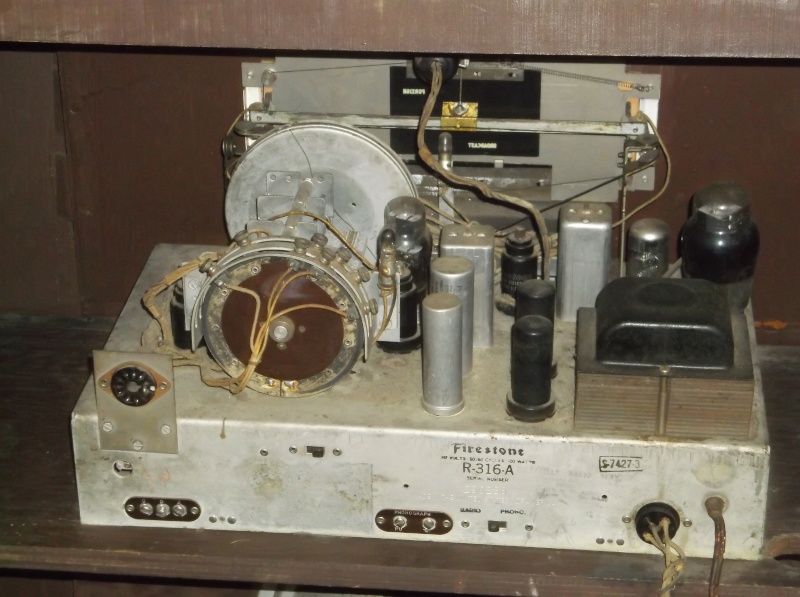 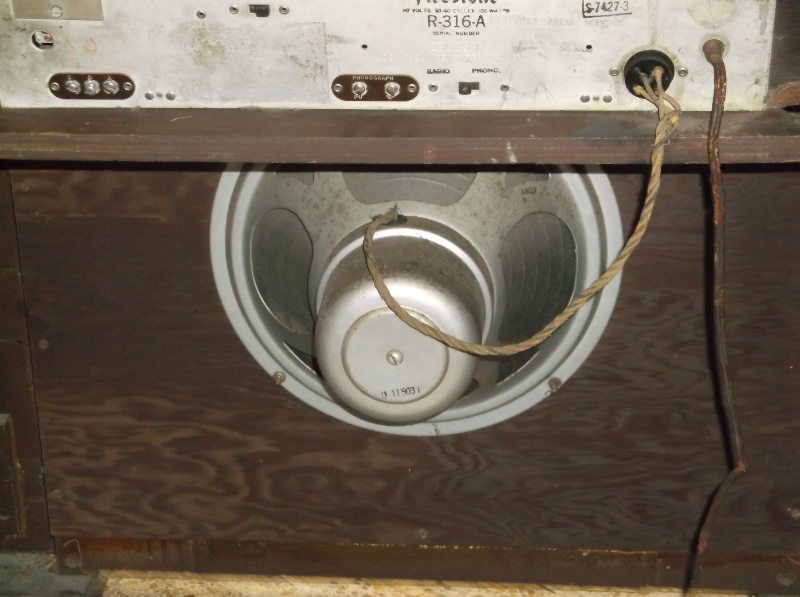 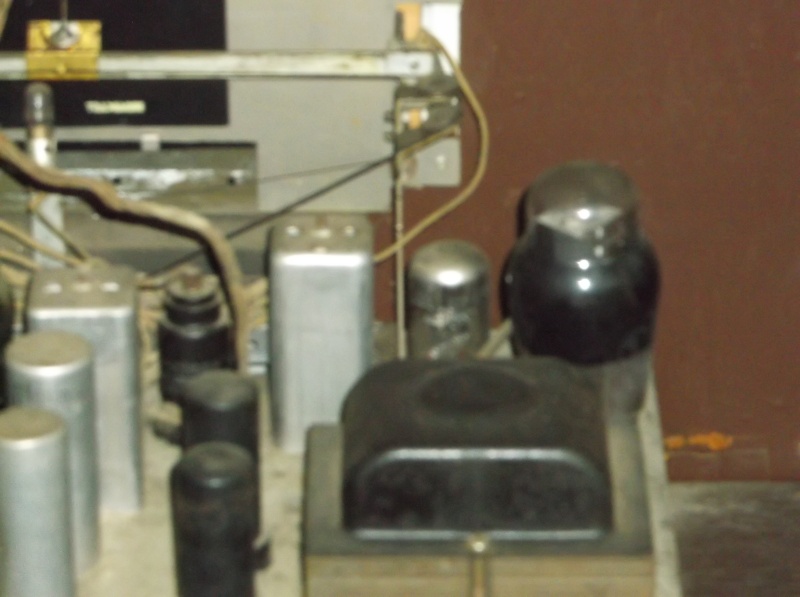 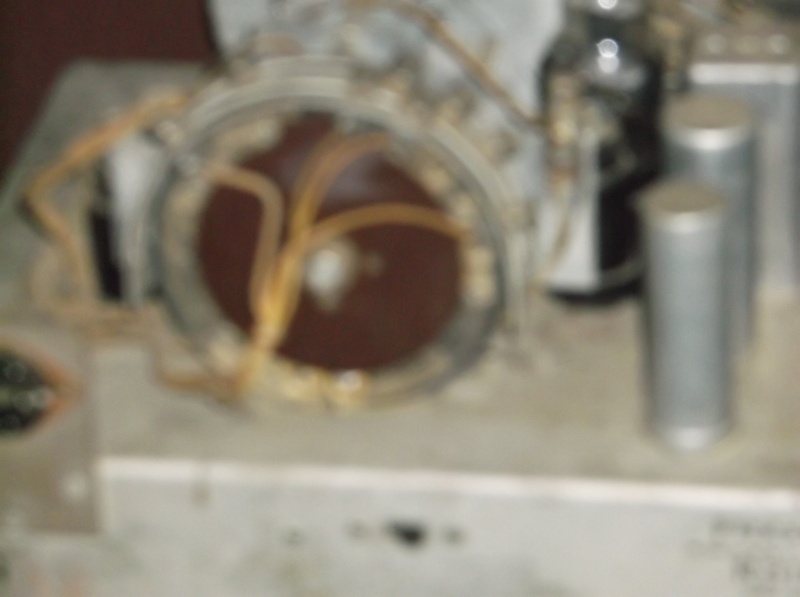 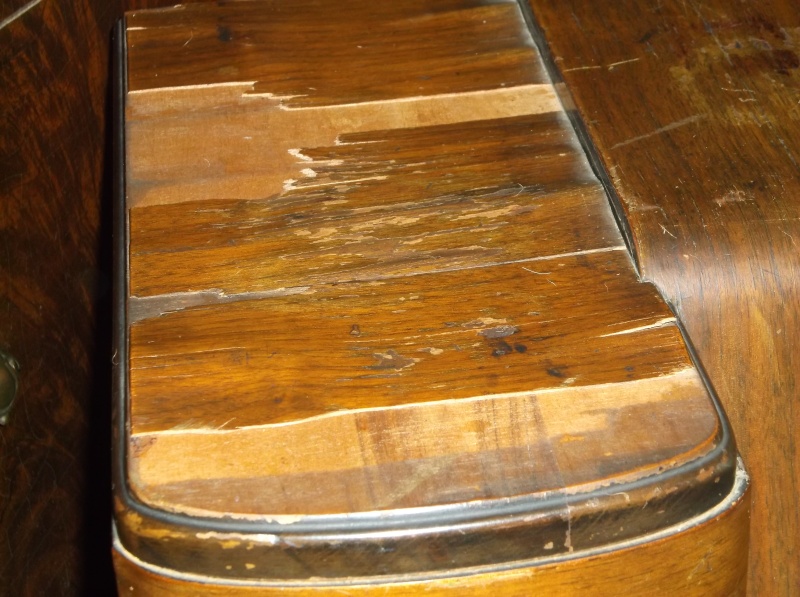 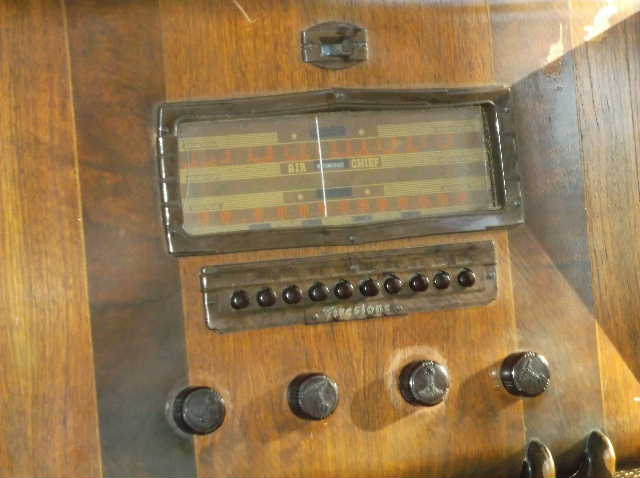 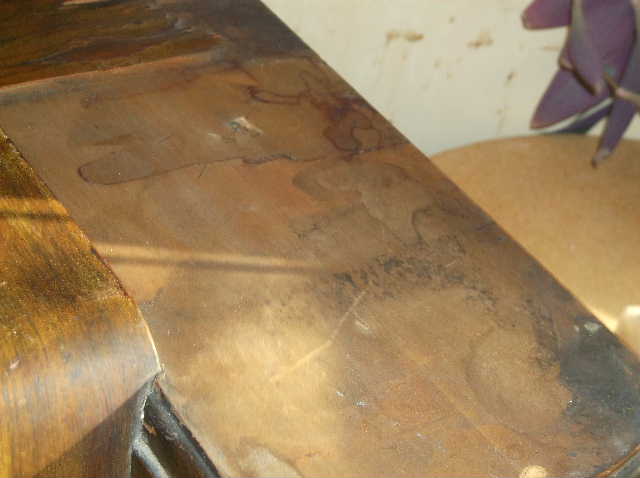 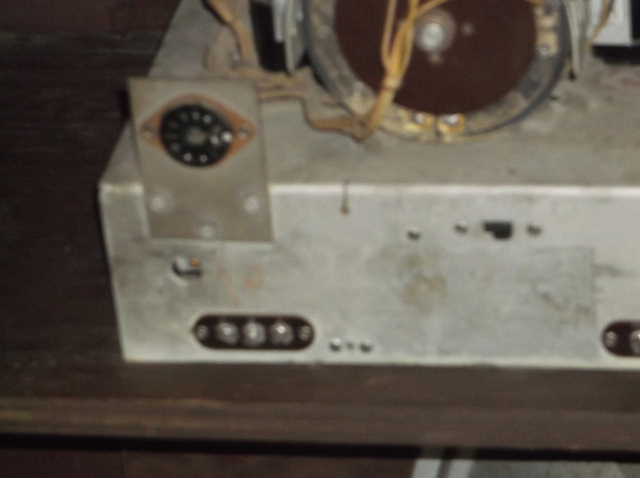 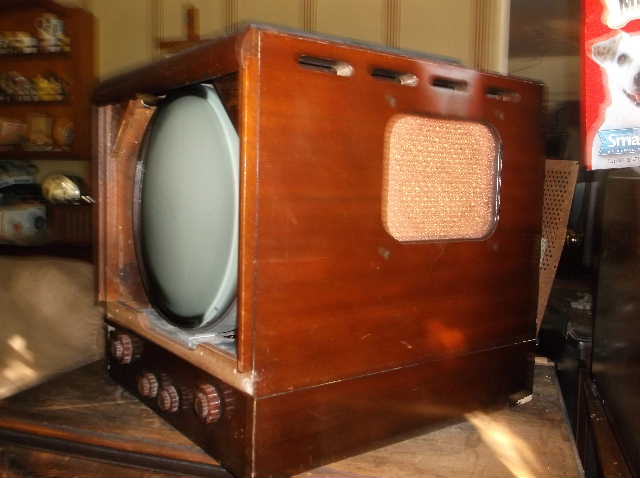 Looks like a couple of fun projects. Good luck and keep us posted.

Well, radio chassis is finally out. Wish I had the original remote control offered for it.. A lot in this set. Many capacitors....
The motor is a tiny little thing.
The tunning dial cord has come off, and, I'll need to fix that.
Most tubes, including the 6U5 eye tube have been replaced.
One paper capacitor, and, volume control, and, on-off switch have been replaced. Cord is shot.
There is some rust, but, not a lot.
_________________
Please also join us here; www.videokarma.org/index.php

Been working on the radio. Starting to re cap it. Replaced rotted power cord, also. Freed up the frozen tunning switches, also.
Someone found a schematic of the thing, and, put it somewhere. I'm having wiring issues. Could someone please find the schematic, again, and, place it here?
Thanks.........
_________________
Please also join us here; www.videokarma.org/index.php

Bill, a neat radio, I wonder if the power tuning also works off the push buttons and doesn't need the remote? A lot of work there but your up to it!
Jerry

As a matter of fact, it does also work off the push buttons. There are 8 push buttons. You can, of course, do manual tuning. I'd just like to find the remote to complete it. The remote only operates the tuning...........

Anybody have a good 6L6 G they can get rid of??? This one's got a broken key, and, it has also been used to death.
Still need schematic, and, would like to get some good G style glass tubes to replace the metal replacement tubes in it.
I like things that glow in the dark...........
_________________
Please also join us here; www.videokarma.org/index.php

The schematic is listed in Riders 11, Firestone page 35. My disk is packed to move, so I can't print the diagram. Hopefully someone else will be able to.