Kraco KB-2345, 23 channel base station. Manufactured February 1976.
The receive didn't work when I got it, but I bought a manual online and it had the schematic, so I got it fixed. 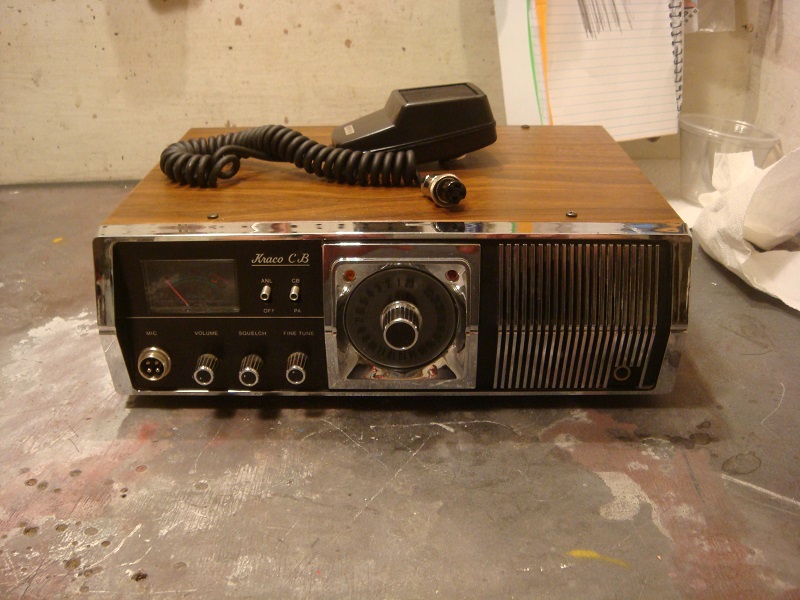 Looks a lot better than most base units I've seen. They are fun to get up and running.

And who are you going to talk to? All the truckers use cell phones nowdays.

There has got to be someone out there with another vintage rig that will want to talk.

Apparently there is a resurgence in CB radios. A guy at work has bought about 4 or 5 of them lately. I remember back in 86 fixing CBs in a shop I worked with. We had a B&K cb test station to work on them. If I remember correctly you put the mike over a cover and then keyed it to get a reading.

One time at that shop this guy came in and left a CB. I checked it out but it had so many problems we didn't fix it. It wasn't worth fixing it. The guy came in and I gave it back to him and explained it. He hit the roof and started cussing at me. After he left the lady who owned the shop came over and said that didn't go over very well. I said no it didn't. She said I hoped he didn't get mad. Then she proceeds to tell me this clown had a hot temper and did time for killing someone he got mad at. I said why didn't you tell me that??? I would have bought the dude another one. He was a big dude. Luckily he didn't come back and shoot the place up.

No idea what is active on the CB band now but back in the 70s, I always had one in my company car. Great to get in touch with local service reps and fun for long trips and listening to truckers who would talk trash and advise to radar set ups on the interstate. Of course we didn't have cell phones back then.
Fond memories of simple times. Jerry

Wildcat445 wrote:And who are you going to talk to?  All the truckers use cell phones nowdays.

Cell phones to call they're dispatcher. Otherwise, they'd all have to know each others' phone numbers to report traffic conditions.

Anyway, skip has been good during the day. I talked to another guy in Iowa, but just today, on SSB on my 40 channel Robyn SB-520D base, I picked up Florida, Seattle, Missouri, and Michigan. Yesterday, Whales (as in UK), San Diego, Mexico, Arizona, and Alabama. AM is busy too, but SSB, especially.
I did some CQing on 125 watts, but found out it was interfering with the TV and making the weather radio go off, so I knocked that off.

SSB is a different class of people, too. More like ham, and little very trash talking. Call signs are generally used rather than "handles" only they are made up instead of issued by the FCC. Typically you would here "number number number, state or country" like "105 Arizona" just for example. (I made that up, but maybe someone is using it.)

Skip has been very good in the daytime, what with the sunspot cycle and all. Been doing some local contacting, but skip too. Vancouver, and even West of Sydney Australia.

I upgraded my rig and antenna. The new-old rig is a Robyn SB-520D from 1978. The antenna is homebrew...two 1/4 wavelength counterpoised whips. SWR is no more than 1.2 anywhere in the band. Ignore the SWR meter on the transceiver--it is always stuck where it is at. 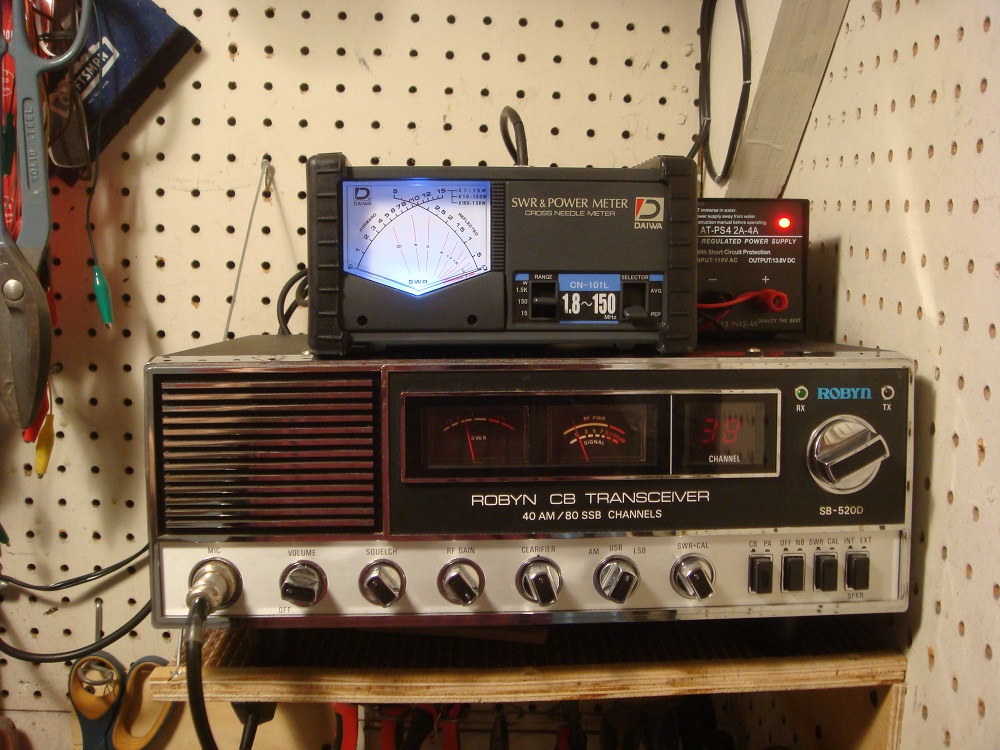 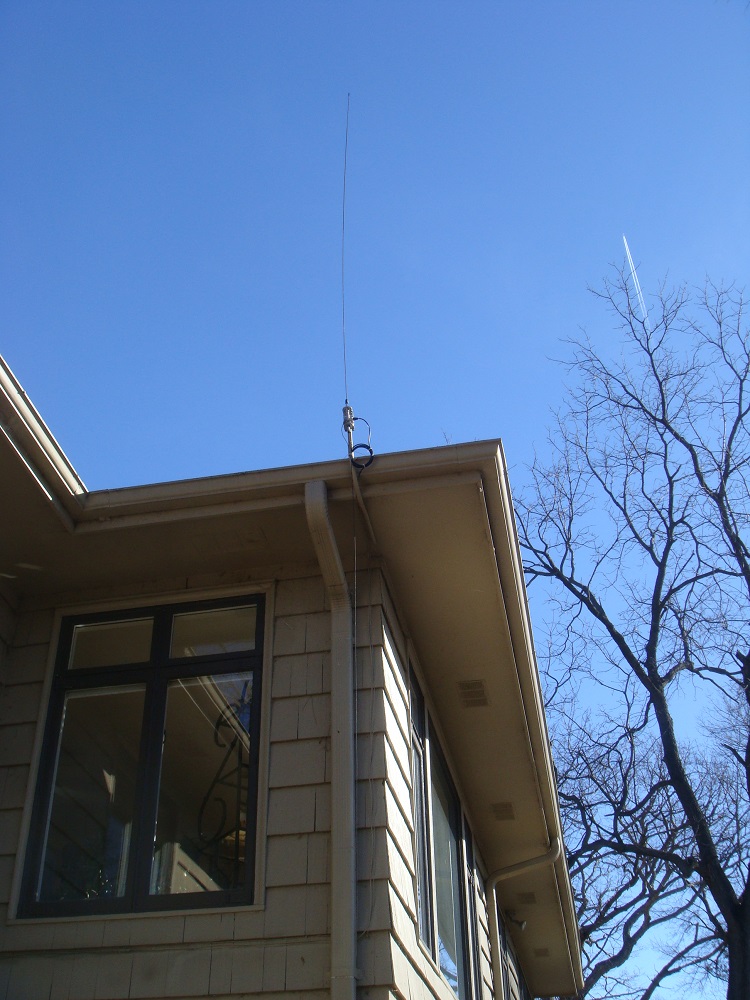 Nice looking setup. It's great to see it can still deliver some good entertainment!

Most everything I own is "retro". 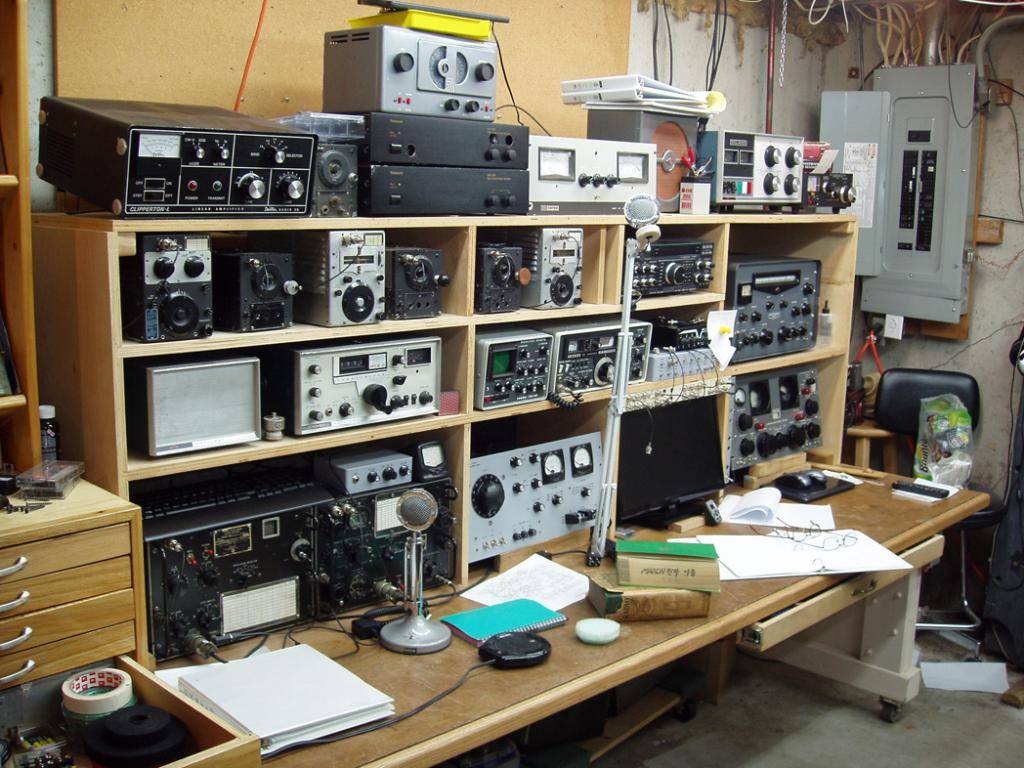 I had a cb as a teen. Paid five bucks for the license. Tried calling people. The only reponse I got was "Will someone tell this asshoole to get off the air?" I lost interest.
_________________
Please also join us here; www.videokarma.org/index.php

I've got an old "white face" Johnson that was my grandpa's. He ran the battery down in his Buick many a night "ratchet jawing" to people on that thing. It is only a six channel, and I have no idea what channels those are. I would like to find an AC cord/harness for it so I could perhaps get it going again. Wonder if there is any interest in a rig like that. It is all tube.

Very little interest, and, I think you still have to be licensed to repair them, though, no longer to use them. There are also some channels that are still verboten to use by the general public, but, I don't know the frequencies. Of course, that may also have changed.
_________________
Please also join us here; www.videokarma.org/index.php

Wildcat445 wrote:I've got an old "white face" Johnson that was my grandpa's.  He ran the battery down in his Buick many a night "ratchet jawing" to people on that thing.  It is only a six channel, and I have no idea what channels those are.  I would like to find an AC cord/harness for it so I could perhaps get it going again.  Wonder if there is any interest in a rig like that.  It is all tube.

The retro tube CBs are bringing pretty good money on the bay nowadays.

I have an old eico from the late 50s all tube that I like to listen to a tunable reciver and crystal control trans. I'm going to find a mike for it and see if it will transmit. Love them old tube radios!