A local guy has one of these O-scopes up for sale and is only asking 10.00 for it. He says it's in working condition. I had no idea how old it was until I looked it up. It appears to be a 25MHZ scope and has a bunch of tubes in it. I haven't used an O-scope since electronics class in high school when we built a kit radio. My question is, is this something I could still use? and what would it be good for? If you don't know what it looks like, here is a link to it on radio museum's site: http://www.radiomuseum.org/r/tektronix_dual_beam_oscilloscope_55.html

I have an old Tektronic 532 that I got in a bunch of junk. It has like 70 tubes with the plugins. I works okay for no more than I need one. I have to fiddle with it each time, but lack of use is its biggest enemy. Very well-built peices of equipment.

The one's we had in school were bench top models that were probably 10-15 years old at the time and I only remember doing basic things on it. To this day I wouldn't even remember how to navigate one. I know you can use them to help detect where you are loosing audio signals in radios at the different stages and you can check to see if your AC is putting out a perfect sinewave or if certain equipment is putting out the proper wave. Once I re-familiarize myself with one, I think I'd be able to figure out how to use it.

All an oscilloscope really is would be a VTVM with a picture tube. You actually see the waveform as well as measure voltage visually. I am not really cranked on using one. I find them more trouble than they are worth, especially for radio. TV might be another matter. Mine is fun to play with on occasion. I have actually fixed a radio with it, a couple times. It is neat to see all those tubes lit and glowing.

The radiomuseum pics show that it uses a separate power supply. Does this guy's unit have the power supply? Regardless, the whole 95 pound unit looks like it would be a difficult fix if it is out of order.

Wildcat445 wrote:All an oscilloscope really is would be a VTVM with a picture tube.

I think it is more the other way around, as anything that a VTVM can measure can be measured with an oscilloscope (though with less precision), whereas a 'scope can provide information that a VTVM cannot. As an example, I have a couple of LPB AM-100P 100 Watt broadcast transmitters under repair in the shop, and I use the 'scope to evaluate things such as AF, unmodulated RF, and modulated RF, all superimposed on a DC value. With a 'scope I can instantly see whether the AC and DC values at any test point are in the ballpark or whether either or both are incorrect, indicating a problem at or before that test point.

A 'scope is generally overkill for antique radio repair, and to use one effecively requires experience. I use mine constantly for a wide variety of electronics, but then, I have been using oscilloscopes professionally for about 40 years.

He says it is in working order. He is only asking 10.00 out of it. Likely because he no longer uses it and he just wants it out of his home or garage due to its size.  This is the photo he posted on the ad: 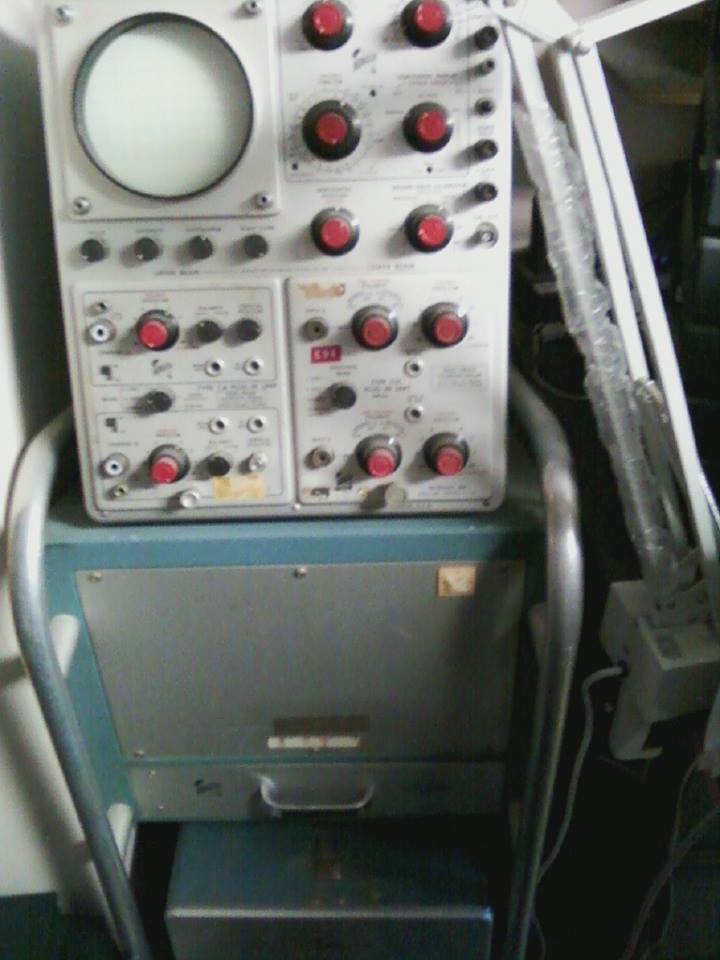 It appears to be complete.

For 10 bucks I would jump on it. A working scope for 10 bucks is a find. If nothing else winter is coming so you can use it and help heat your house at the same time.

I plan to get it. I just won't have the money for a week. He said as long as nobody else wanted it, he would let me get it next week. I'll probably have to give him a few extra dollars to bring it to me bc it's way too large for me to haul. As I highly doubt anyone else would want it. The only comments he got on it so far is by one person that say "what is this thing??? Does it detect UFO's?? lol" Then he says no.. They respond again and say " definitely looks like something from the SCI FI network HEHEHEHEHE"

I hope it works well for you.

The said it's mine, but it is missing leads. Where can one find leads for it? IIRC, the ones we had in school used a BNC connector for the leads. IDK what this one uses.

It looks like it is using UHF female connectors.

I typed that into ebay, and got an assortment of different adapters with that end on it.. Like UHF female to BNC,TNC and N..

Most scope probes these days use BNC connectors, so that is what you may need to adapt. You will need to look into probes that will allow safe testing of your higher voltage circuits. I'll defer to the test equipment whizzes to advise you on that.

Bear in mind that the probe you pointed to on eBay must, because of the price, be a very poor quality of Chinese probe, and may prove disappointing. Better quality 100 MHz 1X/10X probes are selling for about $30 to $70 each. I use Mueller 60 MHz probes with my Tek 453 in the shop, and Velleman 100 MHz probes with my HP 1740A in the field.

Note also that a 100 MHz probe is overkill for a 451, which tops out at 25 MHz depending upon plug-in. You would probably be better off with good quality 40 MHz probes than cheap 100 MHz probes.

I understand what you are saying. That probe was just one of the first ones to come up when I searched the part number out of the owners manual. I will find a better quality probe after I get it. I don't plan to use it a whole lot, but will use it. I'd also like to get a few different plugs for it, as it states something about different lettered plugs that do different things. The scopes we had in school only had a set of leads, with no probes.

tuberadiogeek wrote:The scopes we had in school only had a set of leads, with no probes.

They must have been service-grade 'scopes, as simple leads (or uncompensated coax) aren't sufficient above analog video frequencies.

Online parts houses, such as Mouser, Digikey, and MCM, offer a variety of probes from reputable manufacturers. Even if their probes are manufactured in China those manufacturers contract with the better Chinese factories, which can do very good work. I would steer clear of eBay probes unless you have already checked out that brand online. As with many things in electronics, some of what is found on eBay (and at Amazon and elsewhere) is cheap Chinese junk. If the price seems very cheap the quality is probably also very cheap. Those cheap probes may be made in the same Chinese factories that make probes for the reputable manufacturers, but the cheap probes are made perhaps by the third shift with cut-rate quality and standards. It is like having the Ford third shift make Yugos.

We only used the scopes to help in building a kit radio.
I found one at a local place, IDK how good of quality it is, but usually they only carry good quality stuff. It's at Fair Radio sales. https://www.fairradio.com/catalog.php?mode=viewitem&item=2538
I usually use eBay as a reference for things, then I compare it to other places by price and quality.. I usually steer clear of most electronics on there, and when I do buy electronics off there most come with a warranty and I can usually get a refund if it's junk. Which most of the time its OK stuff and works like it should. However i'm not taking a chance with something like a scope probe. As I don't want to get shocked or damage the scope. That is a good scope and i'm getting it for a steal.