I just put this Magnavox back together (Console Model unknown - I've found some very similar in old brochures on the webz): 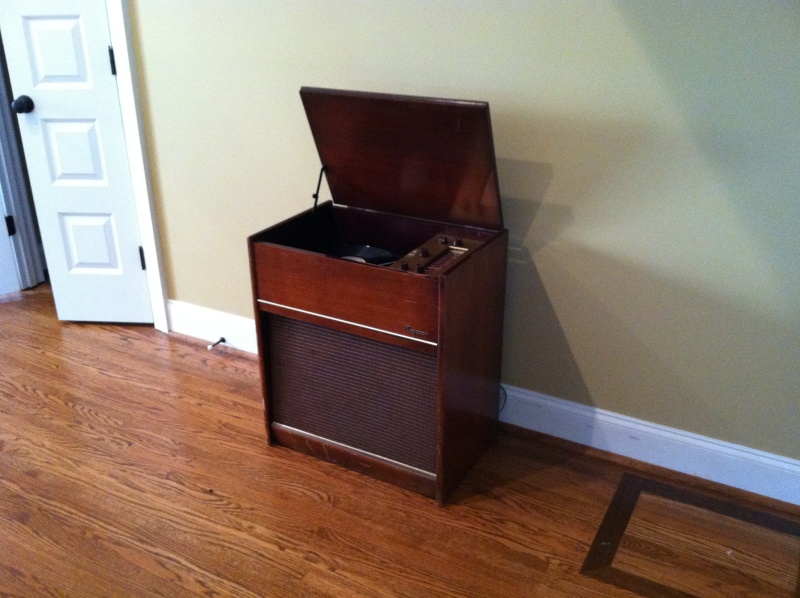 With a relatively inexpensive PYLEPro turntable - chosen only because it had the dimensions to fit in the place of the old Collaro turntable. I chose not to refinish the cabinet/console, and to have the Collaro repaired would have been $670: 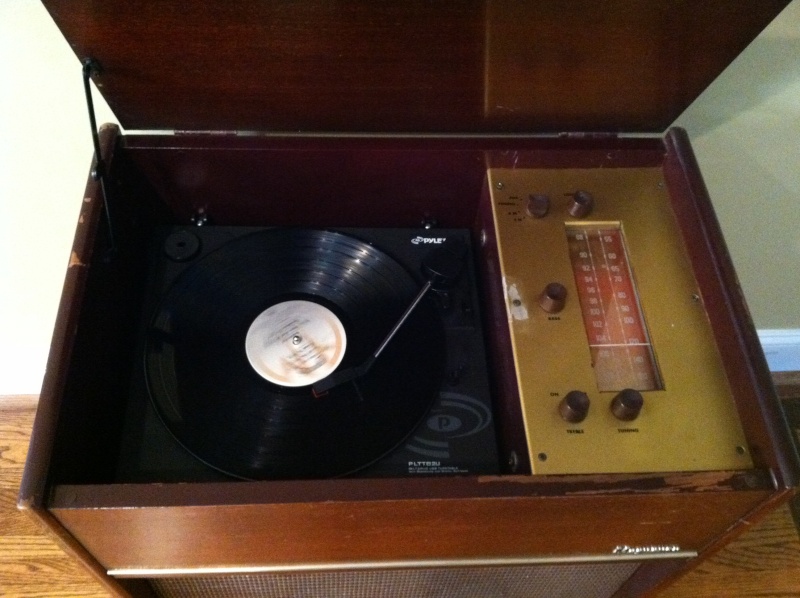 (I could use some advice on what to get that duct tape adhesive off of the gold cover plate without taking the paint off - I've tried everything I can think of without destroying the 'lustrous' gold paint on pressed cardboard - ha!)

Here is a picture of the CR-717 from the SAMS folder (AM/FM/Phono/Aux): 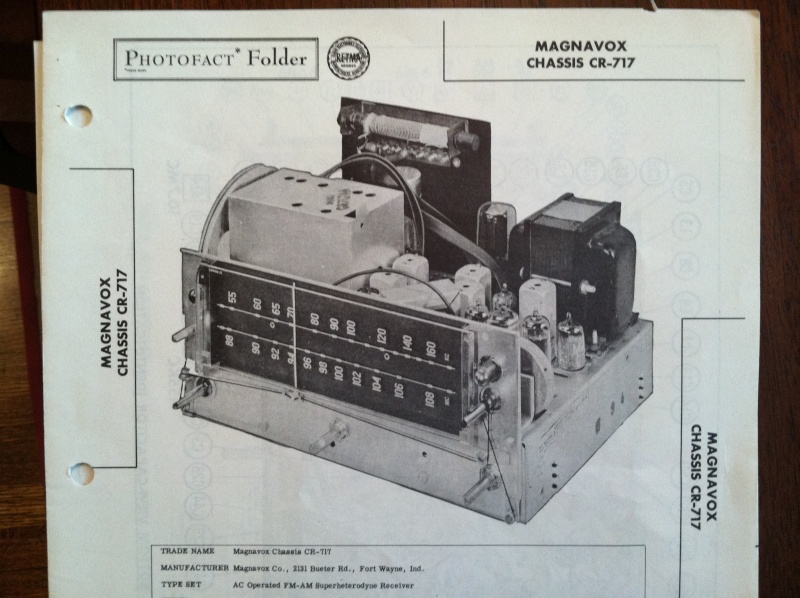 I did a total recap and replaced some of the more obvious out-of-spec resistors. When testing it out on the bench, I had the following readings: 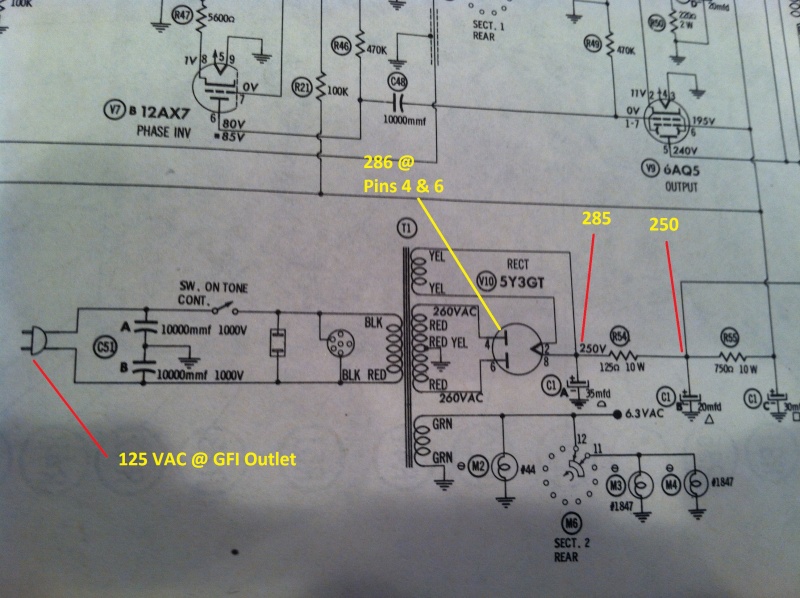 The voltages are approximately 20-25 higher around the transformer and 5Y3GT than what is shown on the SAMS folder -- there is NOT a tube voltage table in the SAMS folder - the console plays and sounds great. It should be noted, the circular turntable connection on the mains side for the old Collaro turntable is not used.

The transformer is a Maganavox 300081-1 with a 117V Primary and 550VCT Secondary with the other secondaries as shown.

Any thoughts, or is it generally within the oeprating parameters of the 5Y3GT ... or since the turntable socket is no loger used?

Could the turntable motor somehow acted like a dropping resistor? I am not that familiar with this radio. Have you got one of the tube info books that give the parameters? I got one but its not handy. Here is a link to one page that has info.

Also what kind of meter are you using digital or analog. Sometimes that can make a difference.

As far as the duck tape have you tried WD40? That can get the gum off. There is also a product that sometimes called adhesive remover or something like that I use.

That's what I was thinking ... the old Collaro turntable with dedicated input could have been accounted for in the power string (?).

This set plays wonderfully. I have the new turntable using another dedicated socket.

And when you multiply the 125 VAC (instead of 117) across the transformer ratio, it really almost works out equal to the voltage increase at the points I show.

I'm down with the 'Best of the Carpenters' LP playing! [you didn't hear that!]

Yup, based on your higher input voltage, I'd say you're okay on your higher readings. Also remember, a lot has to do with what kind of meter you are using. Modern digital multimeters easily have an impedance of around 10 to 11 Meg ohms, looking "invisible" to the circuit under test unlike the old meters (excluding vacuum tube voltmeters that did have high impedance).

The turn-table is in parallel with incoming power, it has no bearing on your voltage readings.

I'm glad you're using a GFI outlet, I'm not a fan of how the factory configured the line filter. It's like the Philco's of the 1930s, where the chassis always has voltage on it no matter how the plug is plugged into the socket.

If you plan on enjoying this, I would make the following changes:

Install a polarized plug and make sure the "hot" side is connected to the switched portion.

Remove capacitor "A" on the incoming line completely.

Capacitor "B" should be changed to a "Y" style rated safety cap and connected to the neutral side of the incoming line.

Carefully monitor the temperature of the power transformer. They really weren't designed for the higher line voltages found in modern homes. Increase in voltage results in hotter running temps and can lead to premature failure.

On one of my RCA Victor's, I installed a mil-spec aluminum housed heavy duty resistor in-line with the power transformer, this drops the voltage the primary of the transformer sees so it runs cooler. The resistor is mounted to the chassis so it acts like a heat sink. I also installed a fuse for safety's sake. If you do this, you will need to carefully measure the typical current drawn in order to size your parts correctly.

Bill Cahill wrote:Carpenters? How about the Troggs?
Or, 3 dog night? Oops! Did I say that????
Bill Cahill

Bill...i didnt know you knew of bands like these...

Oh, forgot to add, to retain the original line-filtering, install an X-style safety rated cap across the incoming line...

How 'bout some Paul Revere and the Raiders....

Bill Cahill wrote:Carpenters? How about the Troggs?
Or, 3 dog night? Oops! Did I say that????
Bill Cahill

Hey Bill do you know how 3 dog night got its name? Here is a bit of trivia. There is a old saying that its so cold you have to put dogs in bed with you to keep warm. A 3 dog night is a really cold night. So they called it that.

Well, there were only two songs I liked by them.
"Black and, White", and, "Freedom for the stallion".
Of course, what else do you expect from someone who also used to like Cheech, and, Chong??
Of course, I still like Bill Crosby, and, Johnathan Winters, whom we just lost.

Dr. Radio/willy3486 ... will do on making changes to the grounded plug/line in etc. - my next step in this project - I wanted to first make sure there wasn't any weird impedance matching situation with the modern turntable.

And sorry guys, the 'PYLEPro' turntable is Chinese-made, but it's the only one small enough I could find to fit in the console.

You know that the Nashville meet is next week. You might could find a different turntable there if your lucky.

When and where willy3486? I'm on the road to Kentucky this week, but should be back by Friday.

Here is a link to the meet. It has better info than I could explain where it is at. It starts at 8:00.
http://www.musiccityvintageradio.org/

I did not answer your question - I was using digital multimeter - a cheaper one I keep around that I can get quick measurements with and not worry if it gets beat up or dropped.

I also like your idea of dropping down the voltage to the primary - even 125VAC (as measured) sounds a little higher than normal.

I'm on the road, and I left the SAMS fodler at the house, so I'll have to check the current rating for the transformer and start looking around.

I have the (an) answer - bucking transformer.

Using either a 120VAC primary to 12.5VAC CT or 9VAC secondary transformer, I have options to lower the line voltage down like they had back in the olden days.

How do you hook up a bucking transformer? I have acquired a few Magnavox tuners and amplifier/power supplies from E-bay. I have experience with early tube electronics and am very careful when items are plugged in. I also wonder about using a 3 wire power cord on these early sets. I will recap the power capacitors under the chassis. I thought about restuffing them but the original cans are really soldered to the chassis. They must have used 100 watt irons to solder stuff to bottom of chassis. Most of these chassis are like new on top and bottom. Seems like 1 out of 4 of the original 6V6 tubes is always 20% lower than the other 3.

Voltage output is way too low. If you install a grounded plug, waste the line capacitors. Plus, the mica mold caps. are junk paper. I would also re cap tuner as well. Original speeakers are important due to having a field coil.
Hope this helps.
Billl Cahill
_________________
Please also join us here; www.videokarma.org/index.php